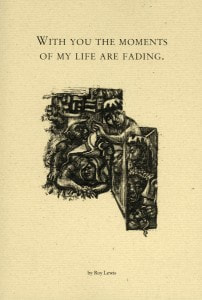 In thirty-seven short movements of mixed verse, prose and dialogue, the poem chronicles the death of a love, and the ensuing struggles for understanding and dignity. A modern Psalm, an elegy or lamentation, it is steeped in the Bible, the ancient and modern classics, in rich West Indian-inflected cadences. Interlocutors hound the speaker, in the manner of Job’s friends. Bitter reminders of other days, of the extent of his loss, tempt him to self-pity, despair, violence. Then, unexpectedly, a provisional calm descends as the speaker, reflecting on the lives of his immigrant parents, learns something of grace and stoicism, survivorship and redemption.

Roy Lewis was born in West Bromwich, Birmingham. He has been writing poetry for as far back as he can remember. He has worked as an actor on film radio and television and has been a long time member of the Stratford Festival Company.