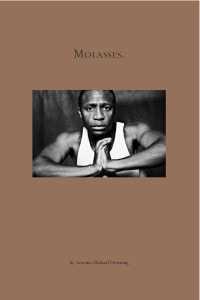 Antonio Michael Downing was born there, grew up here and spent much time elsewhere in between. This is his first novella in years.

“Masked as a revenge tale, Molasses patty-cakes perspectives from chapter to chapter as characters identities are exposed and discovered. A mysterious Le Downing propels the plot while Molasses – a performance pseudonym Downing uses – is the man everyone wants, but can’t understand. Bordering a line between a gritty exploitation film-like storyline and post-modern text, this novella is a high-speed chase through the American south. This may be Downing’s ‘first novella in years,’ as his bio states, but let’s hope it’s not his last.” --Telegraph Journal, Canada

“Downing, who was born in Trinidad, drew heavily from his family’s history for the framework of Molasses. Loosely explained, it follows the lives of two young women who each face an identity crisis when the man they both love, Molasses, suddenly leaves. “This idea of loss forcing someone into an external odyssey that really is an internal journey is a part of my personal story,” Downing says.

“As a child, the death of my grandmother when I was 12 precipitated my immigration to Canada where suddenly everything that I knew about life was thrown into question. This profoundly shaped the way I engage with the world. I think the journey of (the book’s main characters) Ophelia and Amanda Vrazda are personifications of my own quest to reconcile loss with identity.”

As a writer, Downing describes himself as a sensualist, trying to draw from all five senses. He is also keenly aware of the rhythmic potential of words. “The experience of reading Molasses, I’m told, is very confusing at times but rewarding if you pay close attention to the unfolding sensations. I’m very fond of Michael Ondaatje — another colonial island child-immigrant — Albert Camus and Kathy Acker. But I really think my love of jazz and punk rock music like Miles Davis and the Clash, and the hymns I learned on my grandmother’s lap in Trinidad, has had more influence on how I write.” — The Record, Kitchener, Ontario, Canada