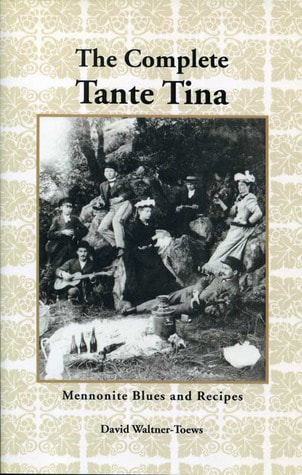 "David Waltner-Toews is, along with Patrick Friesen and Di Brandt, one of the most recognized poets of Mennonite background in Canada, often writing about material from his Russian-Mennonite past... The Complete Tante Tina is a collection of poems largely written in the voice of the eponymous character Tina, who has appeared repeatedly in Waltner-Toews's work since 1979... Waltner-Toews has devoted his poetic career to reminding us of the 'unsettling' and 'impossible' spiritual complacency that North Americans live in. Long live Tante Tina, for her moral clarity and her recipes!"

"As the sequence of poems unfolds, we learn about Tante Tina and her Low German immigrant culture; Haenschen’s rejection of his background; and Johnny’s quasi-return, thanks to developments in the Canadian counterculture. As her children become formally educated, Tante Tina becomes self-educated enough to address people and affairs of the world—most wonderfully Salman Rushdie but also Maggie Thatcher, Pierre Trudeau, and even Rudy Wiebe. Tina seems to think the world’s ills could be cured if only the movers and shakers could share a faspa with her."