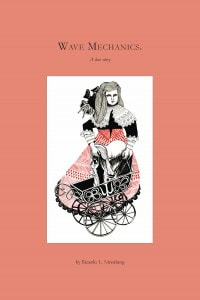 Just before Christmas 1925, the Austrian physicist Erwin Schrödinger took himself and a mistress off to a holiday in the Swiss ski-resort town of Arosa. On January 9th, when they emerged from their labours, Schrödinger had the key to the wave mechanics that would revolutionize twentieth-century science. What took place in Arosa? Who was the unidentified girlfriend? What is the relationship between this tryst and Schrödinger’s mighty burst of creativity in a period of two-and-a-half weeks? More than one secret is revealed, and along the way we learn a great deal about the relations between Sex and Science.

Nirenberg was born and grew up in Buenos Aires. He is the author of a previous novel, Cry Uncle (Latino Press, 1998) and short stories, essays on literary and philosophical themes, and poetic translations. He edits the online literary journal of(f)course at offcourse.org.

“Ricardo L. Nirenberg’s exquisite 2007 novel Wave Mechanics…addresses the circumstances surrounding the creation/discovery of physicist Erwin Schrödinger’s wave equation in 1926, a discovery that substantially altered the landscape of Western physics and chemistry in the last century, along with Werner Heisenberg’s Uncertainty Principle—which some readers may note are more or less mathematically identical….Wave Mechanics is just one hell of a complicated, smart, sexy, and all-around good story….a feast for the senses, a challenge for the mind, and a book I cannot praise enough. In fact, my only regret about this book is that it will not likely get the readership it deserves as a small press release. Those readers or audiences who enjoyed such speculative explorations of 20th Century science as Michael Frayn’s Copenhagen (a play about Heisenberg, his uncertainty principle, and Nazi Germany) will definitely want to order a copy of Nirenberg’s book, as will those who found Copenhagen lacking in passion and heart.” —JoSelle Vanderhooft