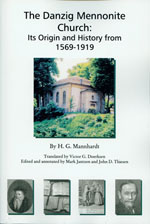 The Danzig Mennonite Church: Its Origin and History from 1569-1919, by Hermann Gottlieb Mannhardt

"Hermann Gottlieb Mannhardt's Die Danziger Mennonitengemeinde. Ihre Enstehung und ihre Geschichte von 1569-1919 (1919) now appears in English translation, thanks to the efforts of several scholars, most notably Victor G. Doerksen, Mark Jantzen, and John D. Thiesen. H.G. Mannhardt, who served as pastor to the Danzig Mennonite Church for forty-eight years from 1879 to 1927, wrote and published this history of his congregation on the 350th anniversary of its founding and the centennial of the dedication of the church building...

Mannhardt's narrative about the Danzig Mennonites may be most valuable to historians of nineteenth- and twentieth-century Anabaptism as evidence of the kind of history-writing that progressive Mennonites were doing at the turn of the twentieth century, both in Europe and North America, to demonstrate that Anabaptists could be good citizens of the modern nation-state."

"Editors Mark Jantzen and John Thiesen have enriched this volume by adding an introduction, footnotes, photos and an index. Victor Doerksen has provided a very readable and accurate translation. An epilogue by Tomasz Ropiejko, current pastor of the Pentecostal congregation now worshipping in the former Mennonite church, recounts the challenges faced in restoring a war-damaged building to its original purpose. Anyone interested in the Mennonite story in Poland and Prussia will find this book rewarding."

"Mennonite scholarship has recently focused on the Russian experience, with considerable research made possible by the availability and acquisition of archival records from depositories now in the Ukraine. The scarcity of primary sources in Poland—in this case, the church records for both the rural and the city branches of the Mennonite community in Danzig (the Flemish and the Frisian)—makes Mannhardt’s account even more significant and valuable, as do the universality of themes and commonality of issues. The struggle for identity, adaptation to culture and society, and efforts to maintain traditional convictions all make this historical narrative amazingly relevant to the life of our churches today."