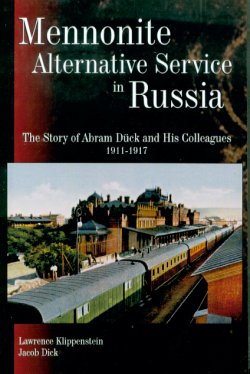 Mennonite Alternative Service in Russia: The Story of Abram Duck and His Colleagues 1911-17, by Lawrence Klippenstein and Jacob Dick

"Mennonite Alternative Service in Russia opens with an excellent short essay by Lawrence Klippenstein tracing the history of “Mennonites and Military Service in Russia” from the first Mennonite settlement in 1789 until the end of World War I. When conscription was introduced and Mennonites protested, the Russian government initially offered the opportunity for Mennonites to perform noncombatant medical service, but this was rejected. Instead Mennonite leaders negotiated an arrangement through which Mennonite young men would be placed in forestry camps near Mennonite settlements, with Mennonites managing the camps and covering basic expenses."

"In 1911, at the age of 21, Abram Duck of Schonfeld, Ukraine, was ordered to report to the Azov forestry camp near Mariapol to begin his obligatory term of service. By that year, the forestry service, or Forstei, had been in existence for some 30 years as a Mennonite alternative to military service in Russia. It had played an important role in Mennonite life, both for the communities as a whole in their relationship to the Russian government and the society around them and for the thousands of young Mennonite men whose lives had been touched by the experience. ... Combining a general overview with more individual histories,(Lawrence) Klippenstein's and (Jacob) Dick's book makes an important contribution to our understanding of the place of alternative service in the lives of the Russian Mennonites in the late nineteenth and early twentieth centuries and perhaps gives us a new appreciation of the legacy of that service for the generations that followed."