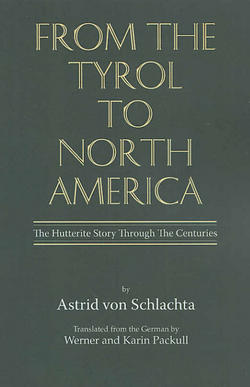 From the Tyrol to North America: The Hutterite Story Through the Centuries, by Astrid von Schlachta

The Hutterite sojourn must be considered one of the truly fascinating sagas of the last five hundred years. It is often told as as story of incredible odds, of success as well as failures, a chronicle of continuity consistency and strength of faith in the face of oppression, persecution, forced conversions, expulsions and intolerance towards those who lived on the fridge of European society. It is an all-too-human story of prejudices and quarrels, but also of endurance, repeated beginnings and visions of a new era, for the principle of the separation of church and state grew out of the Anabaptists' dissent.

Moravia marks the larger radius within which the events of the Hutterite story unfolded and played themselves out. From a superficial, cursory glance, Hutterite life appears to be shaped by tradition and, some would suggest, was stymied by it. yet when the patina of tradition is removed and the various phases of the community's history appear, a different picture emerges, one shaped by altercations, debates, and at times, divisions, evidence that in the final analysis Hutterites were not all that different from other religious groups. They, too, had to come to terms with a well-developed repertory of tradition on the one hand, and with the revival movements and the innovative ideas of the younger generations on the other hand.

“The author skillfully narrates through the Odyssean travels and travails of the Hutterian movement from its rather abrupt coalescence in Moravia—with significant contributions from Tirol —to its current resting place in Midwestern United States and Canada. Of particular importance is the attention she has given to the years in which the movement all but disappeared under the eighteenth-century recatholicization of the Austro-Hungarian Empire, only seemingly to miraculously reemerge, finding temporary resurgence in Russia before emigrating to the United States in the 1870s.”