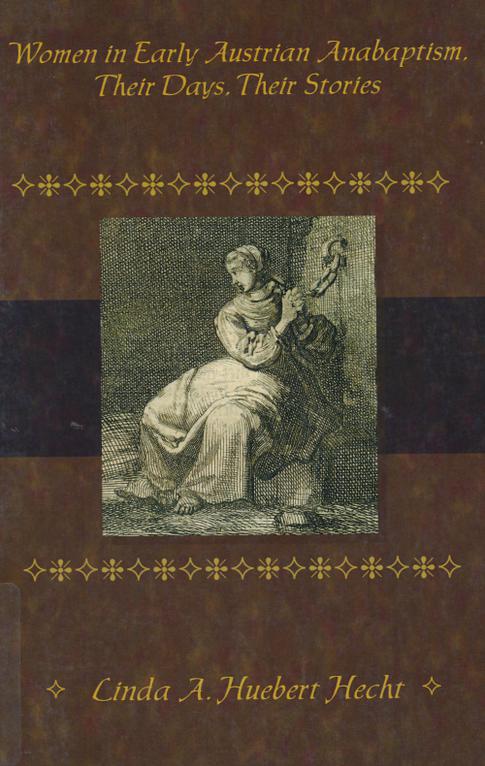 Women in Early Austrian Anabaptism: Their Days, Their Stories, Edited by Linda A. Huebert Hecht

Available for website orders and on Amazon.com and Amazon.ca

Previously untold stories of women persecuted for their faith during the early years of the Reformation are revealed in the Austrian Anabaptist court records. In the turbulent years of the early 1500s, women chose to express their personal faith publicly through adult baptism, which was outlawed by the state. They took the initiative to proselytize among family members and neighbours. Their commitment to the Anabaptist movement in the Austrian territory of Tirol demonstrates profound faith and courage which still speak to us today. These stories, translated from the court records, add considerably to our knowledge of early Anabaptist history and of religious women in general.

"Anabaptist women were the mainstay of the early baptizing movement – a fact generally obscured by most historical narratives describing the movement. In this book, Linda H. Hecht opens a unique window through which we can glimpse the life, faith and practice of people to whom history has generally denied a voice. She does this by gathering and translating the records of judicial proceedings against Anabaptist women in Austria from 1527 to 1531. The translated records published here are contextualized with helpful historical introductions and commentary throughout. Contemporary illustrations and woodcuts enrich the historical texture of the collection. This book shines much needed light on the variety and extent of women’s participation in the baptizing movement." — C. Arnold Snyder

"This book represents the culmination of a long-term project by one of the very few scholars to focus sustained attention on the subject of Anabaptist women. The result is as detailed a picture as the sources allow of Anabaptist women in the Austrian Tirol from 1527 to 1531, the period when Anabaptism was established there and persecution was the heaviest." — Mary S. Sprunger in the Mennonite Quarterly Review