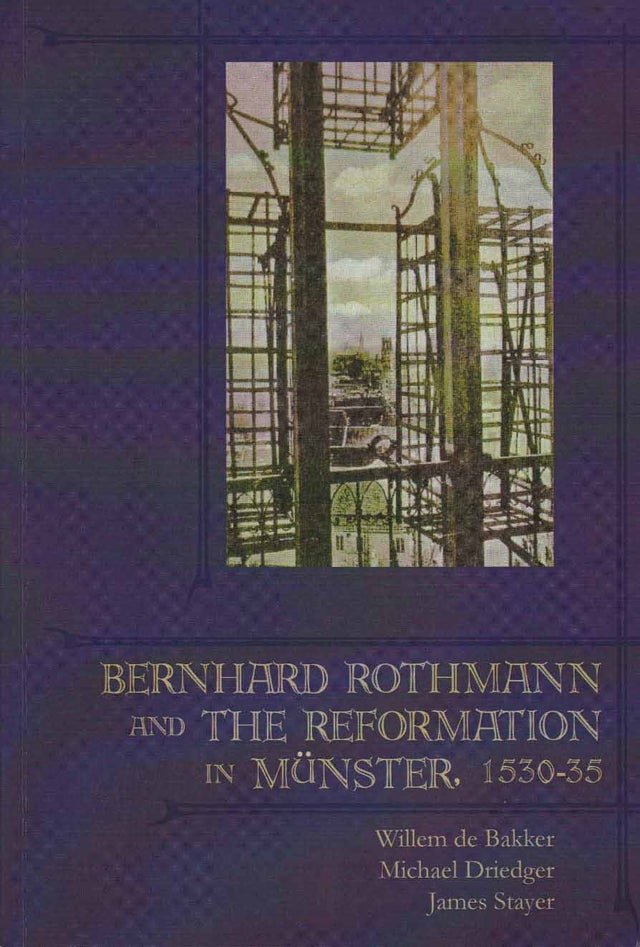 Bernhard Rothmann and the Reformation in Münster, 1530-35, by Willem de Bakker, Michael Driedger, and James Stayer

"More than three decades ago Willem de Bakker completed his dissertation on Bernhard Rothmann and the Reformation in Munster. Now with assistance from James Stayer and Michael Driedger, it has been transformed, in de Bakker's words, into 'a scholarly, up-to-date account in English of one of the great turning points in Anabaptist and Reformation history' (ix). The rise and fall of the Anabaptist kingdom in Munster remains one of the most captivating episodes of Reformation history. This book examines the developments leading up to these dramatic events."

The often misunderstood period of Anabaptist rule in Münster in 1534-35 has cast a dark shadow over the early history of the Anabaptists. For sixteen months in 1534 and 1535 an army made up of Catholic and Protestant allies laid siege to the Westphalian city of Münster. Trapped inside the city’s walls were long-time residents and new immigrants, most of whom had only recently accepted baptism as adult believers and were determined to defend their city’s liberties from the army surrounding them. Their hopes to prevail came to naught. In June 1535 the siege army broke through the city’s defences and slaughtered many of the inhabitants. In the generations that followed these dramatic events, historians have tended overwhelmingly to use narratives written by anti-Anabaptist polemicists as the basis for new analyses that are usually focused on the years of the siege.

This book provides a revised account of Münster’s Reformation. Instead of concentrating on the lurid excesses of Anabaptist rule and the polemical sources that highlighted them, it relies as much as possible on evidence from the protagonists of Münster’s Reformation in both its Anabaptist and pre-Anabaptist phases. The account in this book not only concentrates on the years before 1534 and highlights the complex connections between Münster’s reform activists and Dutch Anabaptists, but it also compares developments in Münster to other Reformation developments in Westphalia and beyond. The result is an antidote to histories that begin with the assumption that Münster’s reformers and their Anabaptist allies were simply deranged criminals and fanatics.

Michael Driedger is an associate professor of history at Brock University. His ongoing research is about the relationship between the “Radical Reformation” and the “Radical Enlightenment”, particularly the activities of Mennonite publishers, philosophers, and political activists in the Dutch Republic of the 17th and 18th centuries. His main book (Obedient Heretics, 2002) is about Mennonite “confessionalization.” He has also co-authored a book about the Reformation in Münster, and co-edited several collections of essays about early modern history. His broader research interests concern the comparative study of religious minorities and new religious movements around the world from the 15th through the 18th centuries, and the relationship between early modern politics and religion.

James Stayer was born in 1935 in Lancaster County, Pennsylvania, USA. He taught at Ithaca College, Bridgewater College, and Bucknell University in the USA, before emigrating to Canada in 1968. He has taught at Queen's University since 1968, where he was promoted to professor in 1978, and retired in 2000.