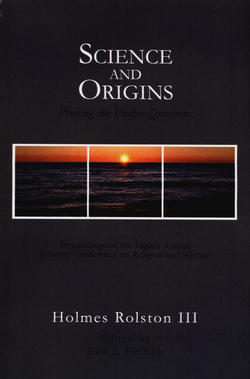 Proceedings of the Eighth Annual Goshen Conference on Religion and Science

To the Goshen Conference on Religion and Science of 2008 Holmes Rolston III brought three messages. These are summarized in his third lecture as three Big Bangs: the Primordial Big Bang of the universe, life’s Big Bang ushering in life on Earth, and the mind’s Big Bang bringing a self-conscious mind-spirit. In this conference Rolston’s primary interest was focused on the latter two Big Bangs: the explosions of life on Earth and of the mind-spirit of humans on Earth.

The question remains open whether the emergence of life in general and intelligent life in particular is contingent on specific events or if life is a necessary consequence of the laws of nature. However, as Rolston points out, biologists and cyberneticists, claim that something new is introduced into the universe with the explosion of life. That something new, which Rolston considers the central concept in biology, is information. The idea that information is a causal agent was presented indirectly in a previous Goshen conference. This concept remains, however, undefined in terms of a detailed physical theory. And the idea that the mind-spirit may set us apart from other animals was not universally accepted by people at the conference. The discussions were, therefore, lively, and this was encouraged by Rolston.