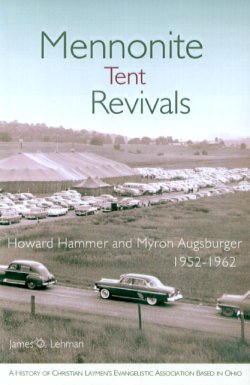 “In the 1950s, Mennonite communities in Ontario and western Canada experienced successive summer tent campaigns. Mennonite evangelists from the eastern United States set up tents and held revival meetings from two weeks up to a month in one place. In western Canada, some people viewed these tent campaigns as positive, others as negative. Canadians did not get a sense of the context out of which these tent campaigns came, how recently they had begun, nor what they represented. Canadian readers will find this book by James O. Lehman helpful to understand these campaigns better. Lehman, director of libraries at Eastern Mennonite University and author of a number of local history books, presents a well-documented study of the beginnings of Mennonite tent revivals in the eastern United States. In the process, he places the Canadian tent campaigns into context. He shows why they began, who promoted them, what they were intended to do and why, when their appeal began to fade, they were brought to western Canada.”

-John J. Friesen in the Journal of Mennonite Studies