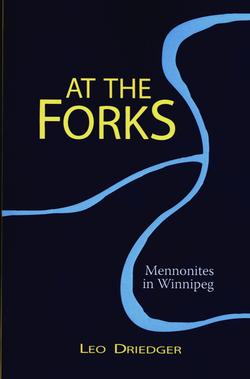 At the Forks: Mennonites in Winnipeg, by Leo Driedger

Out of website stock. Available on Amazon.ca and Amazon.com.

One hundred and forty years ago, the first Mennonites in Manitoba stopped only briefly in Winnipeg to pick up supplies before heading to their rural reserves. The city was too risky for a conservative people who were unprepared for the 'world.' How, then, has it come to be that Winnipeg is home to the largest number of Mennonites in any single city in the world? Driedger tells us where the Mennonites came from, how they changed from a rural to urban people, and why these trends occurred at the forks of three rivers named 'muddy waters'? Winnipeg. At the Forks looks at the formation and cultivation of the Mennonite community in Winnipeg, focusing on its institutions, industry and arts.

"When a handful of Mennonite families began to meet to worship in Winnipeg in 1906, there was no hint that the city would one day become a major hub of Mennonite institutional and cultural activity. Since mid-century, however, the population of Canadian Mennonites has shifted significantly from rural to urban areas, and Winnipeg, asserts sociologist Leo Driedger, is now home to more Mennonites than any city in the world. With At the Forks, Driedger, a prolific author, a professor emeritus at the University of Manitoba and a resident of the city for nearly fifty years, aims to describe what Winnipeg Mennonites are doing and how they became an urban people. He finds evidence of changing lifestyles, norms, and religious beliefs, but also of a continued commitment to Anabaptist values that has not only survived but been invigorated by the opportunities of the urban environment."

- Jeremy Weibe in the Journal of Mennonite Studies

"Driedger goes far beyond simple description of these topics. As might be expected of a veteran sociologist, his writing is often very analytical, and detailed data are provided to back his analyses. But the author’s writing style is entirely understandable to the general reader, and he consistently makes the narrative interesting, not always an easy accomplishment."

"Driedger’s narrative is a classic story that should be on the library shelf of every Mennonite Church in Canada. It is a gift to any serious Anabaptist Mennonite wanting some significant signposts for the future that are firmly rooted in the past."

Leo Driedger (1928-2010) was Professor Emeritus of Sociology at the University of Manitoba, where he taught, researched and published for more than forty years. He continues to write there today as Senior Scholar. For more than twenty years, Driedger has served on boards of the Mennonite Central Committee (MCC Manitoba, MCC Canada, MCC International). His teaching, research and service have allowed him to travel extensively yet he and his family have called Winnipeg their home for nearly fifty years. This is his nineteenth book.

Sold Out
Add to Cart