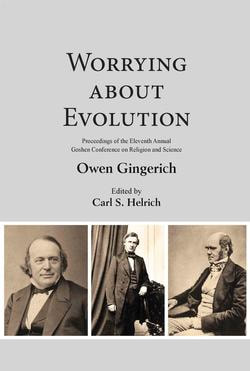 Worrying About Evolution, by Owen Gingrich

Proceedings of the Eleventh Annual Goshen Conference on Religion and Science.

During a fateful period in 1923-24 Goshen College was closed as a consequence of a struggle within the Mennonite Church that can be identified as between conservative and liberal ideas. Goshen College was considered to be too liberal. A result was the removal of certain offending volumes from the college library and a shunning of ideas such as Darwinian evolution.

Owen Gingerich, Professor Emeritus of Astronomy and of the History of Science at Harvard University and a senior astronomer emeritus at the Smithsonian Astrophysical Observatory, relates this in the beginning of his lectures and introduces the primary protagonists in the national struggle for the mind of American biology: Louis Agassiz and Asa Gray of Harvard. The connection to Goshen College is that the bust of Louis Agassiz once graced the Goshen College science hall along with a bust of Isaac Newton.

Against this backdrop Owen outlines in some detail the history of Darwin’s ideas and of the difficulties Darwin himself had with the implications of these ideas. He carefully considers God’s role in evolution as seen by Darwin, Gray and Agassiz as well as God’s role in the concept of design espoused by William Paley. Evil and suffering, Owen points out, are part of the human condition and must be considered theologically. They are not necessary consequences of evolution. But Darwin found evil and suffering in the animal kingdom making it impossible for him to infer a biblical God from the course of evolution. Darwin did not have a source for mutations. Gregor Mendel’s seminal work on genetics had been published in 1866, but only appreciated after its rediscovery in 1900. It was unknown to Darwin when he published the Descent of Man in 1871. As Owen points out, modern genetics provides a structure within which mutations can be understood. But modern genetics also indicates that biological development is not as simple as we may have once expected.

Owen Gingerich is Professor Emeritus of Astronomy and the History of Science at the Harvard-Smithsonian Center for Astrophysics.