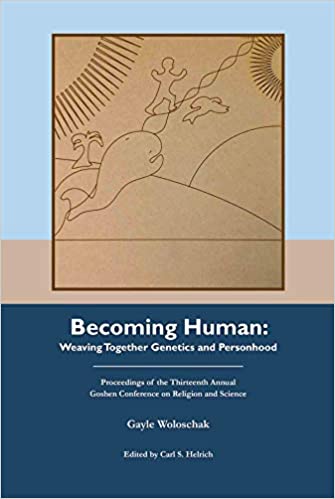 Becoming Human: Weaving Together Genetics and Personhood, by Gayle Woloschak

Becoming Human provides reflections on the human person and personhood relating theological and biological concepts on how personhood leads to particular attributes that are distinctly human. The essence of personhood relates the hypostasis of biological existence to the hypostasis of other-worldliness. There have been many discussions on what makes humans unique among animals—certain DNA sequences are characteristic of humans and can be used to demarcate humans from other creatures. With regard to functional attributes, the ability to take responsibility particularly for those who are disabled or disadvantaged in some way appears to be (mostly) distinctly human. Perhaps what is most significant about humans is human language, which is open-ended and productive, allowing for an infinite set of utterances from a finite set of elements. Creativity, another perhaps unique human attribute, is linked to language, and often verbal expression leads to new ideas and perspectives. It was in naming the animals that Adam learned that he was distinct from them; as he learned about the animals, he also learned about himself. Finally, the ability to experience suffering may also be distinct among humans and somehow helps to develop the human person in a way that provides a tempering and growth. Pain is distinct from suffering, although suffering can involve the perception of pain as something that occurs and engenders a desire to stop it. This can involve not only physical but also non-physical (including psychological) pain. Human suffering is probably part of the human condition, tied with death and the vulnerability of all of life. Despite this, death is a part of the normal cycle of life on earth and is essential for evolution to take place. Human beings are to some extent defined by evolution; without death, evolution would not be possible and one could argue that humans would not be human.

Gayle E. Woloschak is Professor of Radiation Oncology, Radiology, and Cell and Molecular Biology in the Feinberg School of Medicine at Northwestern University.