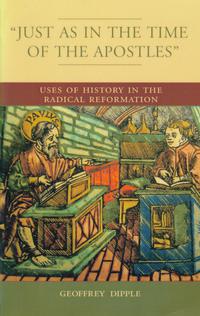 "Just As in the Time of the Apostles": Uses of History in the Radical Reformation, by Geoffrey Dipple

"Geoffrey Dipple’s insightful analysis challenges the dominant interpretation of Franklin H. Littell, who argued that the radicals sought a restitution of the apostolic church. Dipple reads the sources with care and integrity, critically assesses recent scholarship, and reaches important new conclusions about the nature and function of historical thought in the Radical Reformation."

"Geoffrey Dipple does for Radical histories of the fall of the Church what James M. Stayer did for Anabaptist teaching on the Sword thirty years ago. He concludes that for the Radicals history was not a driving principle for reform, but a secondary development to understand and defend decisions and practices made on other grounds. This is an important book not only for the question of Anabaptist primitivism, but also for understanding the external boundaries and internal divisions of the entire Radical Reformation."

"In this survey and analysis of the use of history in the Radical Reformation, Geoffery Dipple examines, critiques, and ultimately revises the conventional understandings promoted and inherited by past generations of Reformation historians. Anabaptists and others who belonged to the ‘radical’ wing of the Reformation were presumed until now to have shared a foundational, if not naïve, conviction or project of restoring the Church to its primitive state, which is called 'restitutionism.' Although various stages of revisionist scholarship challenged who was part of the original, genuine core of the Anabaptist movement, and who was to be excluded from that core, all scholars generally accepted the claim that the Radicals were New Testament primitivists. Rather than viewing the Radicals as blatant restitutionists, Dipple’s research qualifies such general understandings. The Radicals can now be viewed more adequately as having developed historical visions, not as the basis for their reform agenda but as a later stage in the argumentation and defence of the visions for the Church they had already set forth on other grounds."

"This is a useful work, which sets out to revise Franklin H. Littel’s thesis about the nature of the Anabaptist movement and the Radical reformers’ views of history of the Church. According to Littell’s fifty-year-old thesis, the primitivism of the Reformation reached its most extreme form in the Radical Reformation especially among what he calls the ‘Anabaptists proper’. Littell also assumed an intrinsic connexion between primitivism and a separatist ecclesiology. The author of the present work sets out to show that radical visions of history were not static but that they developed as reforming agendas developed and that the apostolic model was no more the sole model of the Church for the Anabaptists than it was for any other reformers, magisterial or not."

– Irena Backus in the Journal of Ecclesiastical History

Geoffrey Dipple is a Professor of History in the Department of Social Sciences, Augustana

Faculty, at the University of Alberta in Camrose, Alberta.