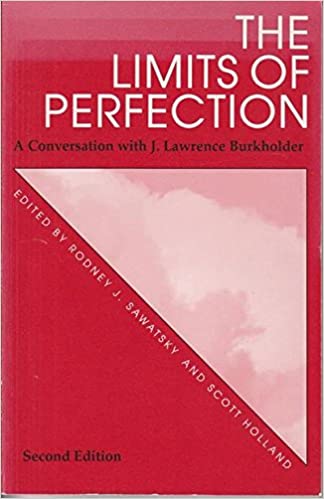 The Limits of Perfection: A Conversation with J. Lawrence Burkholder, Edited by Rodney Sawatsky and Scott Holland

"During the course of his long career, J. Lawrence Burkholder served the church in many different roles: pastor, relief worker, professor, college administrator, philosopher, theologian and church statesman. As a young man, Burkholder attended the Lutheran Theological Seminary in Gettysburg, Pennsylvania, before accepting a pastorate in a small Mennonite church in northern New York. In 1947 he embarked on a two-year term of service with the United Nations as a pilot flying relief supplies into China after World War II. The experience in China was formative. Burkholder returned to graduate studies at Princeton Theological Seminary haunted by the memories of painful choices he and other relief workers faced as they tried to distribute limited supplies equitably in a context of overwhelming human need. Those memories were formative not only for his dissertation - "The Problem of Social Responsibility from the Perspective of the Mennonite Church" - but also for much of his later writings on social and political ethics. Following a ten-year teaching appointment in the Bible Department at Goshen College, Burkholder accepted a professorship at Harvard Divinity School, where he later served as dean. In 1971, he returned to Goshen College as president, a position that he held until his retirement in 1984.

Although Burkholder spent much of his life serving the church in positions of leadership, his thought often ran at cross-currents with the dominant voices of his generation. Burkholder's experience in China, his active involvement in the civil rights movement and his long career as an administrator brought him face-to-face with the themes of justice, compromise and ethical ambiguity--topics not generally in vogue in Mennonite academic circles during the 1970s and 1980s.

Not until 1989, three decades after its completion, was Burkholder's dissertation published. The Limits of Perfection, a collection of essays on the significance of Burkholder's thought, appeared four years later. This bibliography of Burkholder's complete published work is a starting point for further assessment of his place in Anabaptist-Mennonite thought."