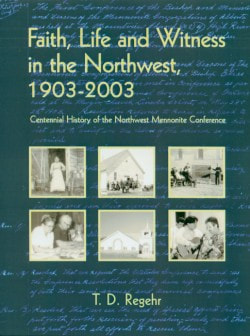 The Northwest Mennonite conference, formerly the Alberta-Saskatchewan Mennonite Conference, has had member congregations in Alberta, Saskatchewan, Montana and Alaska. It was organized by three small Alberta congregations in 1903. It has grown by adding new congregations of Mennonite settlers and initiatives in northern missions, voluntary service, and church planting. It now finds itself in a period of transition as it assesses new challenges and the impact of a major reorganization of the parent national and international conferences with which it is no longer affiliated.

The Mennonite community is a diverse one stretching from coast to coast. T.D. Regehr has written an account of one branch of the comunity, the Northwest Mennonite Conference, formerly known as the Alberta Mennonite Conference, which later evolved into the Alberta-Saskatchewan Mennonite Conference. One of the better histories of the Canadian Mennonite experience, Regehr's book provides an overview of the evolution of the Northwest Mennonite Conference, from its humble pioneer beginnings until the centennial year of 2003. He describes the struggles, successes, failures, and challenges faced by conference members, presenting the historical "warts" in a non-judgmental manner. More important, he chronicles the development of the Northwest Mennonite Conference from its inception as a rural agricultural community through the 20th century, along with the conference's reaction to World War II, postwar urbanization, radio, auto insurance, and the other phenomena that are now taken for granted. Because Faith, Life and Witness in the Northwest Conference is an overview, historians and subject specialists searching for items such as membership statistics will be disappointed. There are, however, extensive endnotes and an index. This interesting, informative, and important book is recommended for students of Canadian Mennonite history and Western Canadian history. - Canadian Book Review Annual, 30th-anniversary volume reviewed by Jaroslaw Zurowsky