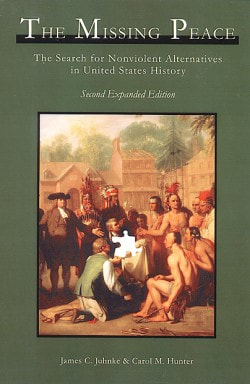 The Missing Peace: The Search for Nonviolent Alternatives in United States History by James C. Juhnke and Carol M. Hunter

“This is a courageous, almost unpatriotic, book by two American historians: Juhnke, a Mennonite, and Hunter, a Quaker. It turns American history upside down. The great meta-narrative constructed on a trajectory of ‘just’ wars -the Revolutionary War against tyranny,

the Civil War against slavery, the Spanish-American war to liberate Cuba, World War 1 to ‘end all wars,’ World War 11, the ‘Good War,’ the Vietnam crusade against Communism - is confronted at every turn. The authors argue that ‘alternatives’ to war existed in each

instance. They also argue that historians have been guilty of ignoring moments when ‘peace broke out’ and ignoring ambassadors of peace in American history. The book's title, ‘Missing Peace’ combined with the book's cover illustration featuring Benjamin West's famous painting ‘Penn's Treaty with the Indians’ with the shape of a puzzle piece missing, plays on a pun. The authors thus make a twofold argument: first, that peace unnecessarily has been ‘missing’ in the consistently violent US history; and second, that the missing ‘piece’ from that national narrative (i.e., the moments and people of peace) has now been identified and those ‘facts’ reinstated in the national story.”

—Royden Loewen in the Journal of Mennonite Studies

"Historiography has too long been supinely in the service of the myth of redemptive violence. This work is a timely and eye-opening corrective that helps the reader see U.S. history from a whole new perspective."

"This book is a provocative, informative alternative to conventional histories of the US — a much needed antidote to American illusions about the redemptive power of violence."

"In the martial atmosphere brought on by the horrific events of September 11, 2001 the myth of redemptive violence is once again ascendant. The need to glean counterexamples from the past has never been more pressing. . . . The Missing Peace is an important step toward conceptualizing an American past usable to teachers and peacemakers."

"The scope of the book is stunning... Juhnke and Hunter make a compelling case for why we need to remember national history carefully and critically, with heightened sensitivity to the prophetic peacemakers of the American tradition."

"Only when peace heroes become as recognized as war heroes in our textbooks and monuments will we have a chance to become a nation (and world) at peace."

"If there really is an alternative way of peace, books like this are essential in pointing us in that direction."