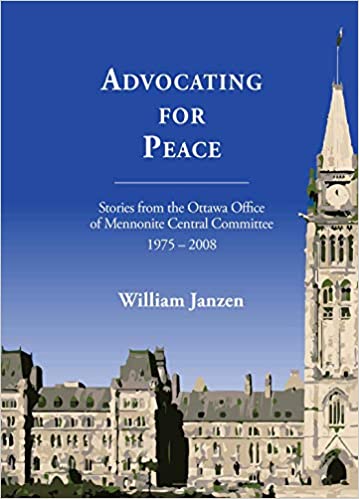 Advocating For Peace: Stories from the Ottawa Office of Mennonite Central Committee, 1975 – 2008, by William Janzen

In 1975, Mennonite Central Committee Canada established the Ottawa Office to monitor and interpret government policy for its Mennonite and Brethren in Christ constituency, and to undertake advocacy to government on behalf of its national and international programs. William Janzen was the first director of MCC’s Ottawa Office, a position he held for thirty-three years. In this volume, he shares a rich collection of stories from those years of “advocating for peace.”

William (Bill) Janzen grew up in a Mennonite community in Saskatchewan. He studied at Canadian Mennonite Bible College, a forerunner of Canadian Mennonite University, and at the University of Winnipeg. He obtained an M.A. from the Norman Patterson School of International Affairs at Carleton University, another M.A. in Religious Studies from the University of Ottawa, and a Ph. D in Political Science from Carleton. From 1963 to 1966 he worked in the Democratic Republic of the Congo under Mennonite Central Committee and from 1971 to 1976 he was a part-time minister at the Ottawa Mennonite Church where he has been a member ever since. He served as director of the Ottawa Office of Mennonite Central Committee from 1975 to 2008, albeit with several ‘leaves of absence’ including two years in Egypt. Bill and Marlene have two adult children. Bill has published several other books including, Walk Humbly With Your God: A Collection of Meditations, CMBC Publications, Winnipeg, 1979, pp. 111; Limits On Liberty: The Experience of Mennonite, Hutterite and Doukhobor Communities in Canada, University of Toronto Press, Toronto, 1990, pp. 375; and, with Frances Greaser, Sam Martin Went to Prison: The Story of Conscientious Objection and Canadian Military Service, Kindred Press, Winnipeg, 1990, pp. 64

Ray Funk, Member of Parliament, 1988 – 1993; “I stayed in close contact with Bill Janzen…, coming to value his wisdom and experience, and considering him the single most influential person in shaping my work.” Quoted in The Canadian Mennonite, November 10, 2014

Bruce Jutzi, Foreign Service Officer and Ambassador, “Bill’s approach is not to … preach at you or hector you on an issue, but to patiently construct a well-considered argument to support his presentation in a sympathetic fashion and as a result, I believe… he has achieved very effective results.” October 29, 2000.

Jake Koop, Senior Defence Department official, “… your willingness to listen and respond… on matters … of common concern during the height of the Cold War were very precious and meaningful to me….my friendship with you…had a profound impact on much of my DND work… on issues of arms control, disarmament, nuclear test ban negotiations, nuclear weapons proliferation, etc.”, Letter June 16, 2008

David Fransen, Senior official and Canadian Consul General in Los Angeles, “Your contribution has been truly profound. You have identified the substance, arguments and position on all the most important and contentious issues. You have established … a highly regarded record of thoughtful, balanced yet forceful advocacy.” Letter July 16, 2008.

Lloyed Axworthy, MP 1979 – 2000; “Bill… was always a source of good advice based upon a sound set of values which provided assistance to countless people around the world.” Quoted by Dennis Gruending in the Prairie Messenger, July 16, 2008