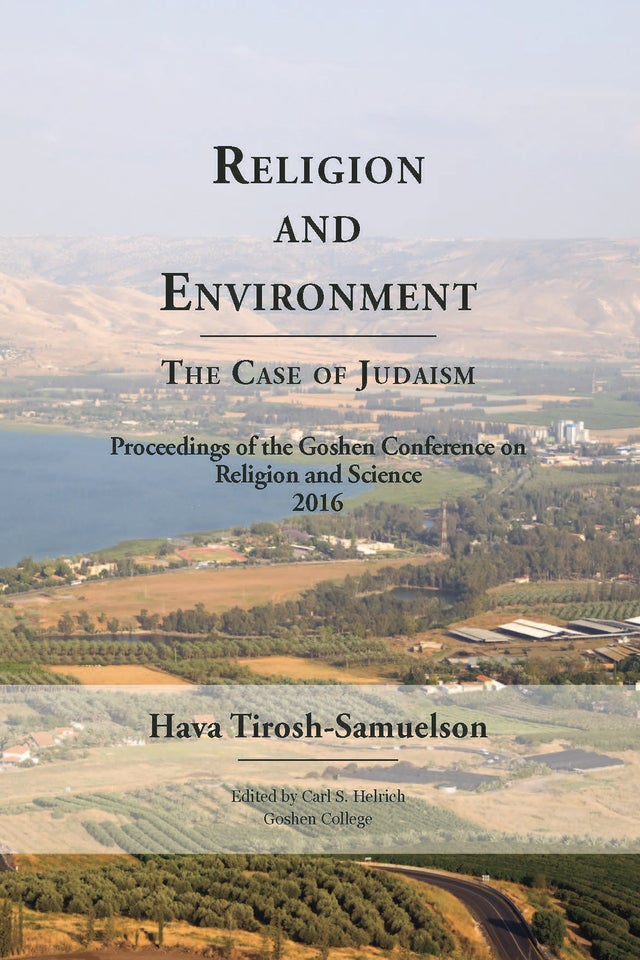 Religion and Environment: The Case of Judaism, by Hava Tirosh-Samuelson

In each annual Goshen Conference on Religion and Science, a single speaker, who has proven to be an important voice in the dialogue between religion and science, is invited to present a topic of her or his choice in a series of three lectures. The speaker in the 2016 Goshen Conference was Hava Tirosh-Samuelson, Regents Professor of History, Irving and Miriam Lowe Professor of Modern Judaism, and Director of Jewish Studies at Arizona State University. Tirosh-Samuelson chose to illustrate the interplay of religion and science by focusing on Jewish conceptions of nature as they have evolved over time from antiquity to the present. Presenting Judaism as a way of life, Tirosh-Samuelson shows how the foundational beliefs of Judaism—creation, revelation and redemption—and the Judaic ethics of responsibility have given rise to contemporary Jewish environmentalism. Written as intellectual history, Tirosh-Samuelson’s lectures are inherently interdisciplinary, engaging biblical hermeneutics, theology, philosophy, mysticism, ethics, and science. The lectures are distinctly cross-cultural, presenting the interaction of Judaism with ancient Greek philosophy, medieval Islam and Christianity, as well as modern philosophy. This methodology enables Tirosh-Samuelson to explicate her textual sources, while acting as a publicly engaged scholar who is deeply concerned about the destruction of planet Earth. With emphasis on the primacy of ethics, Tirosh-Samuelson invites readers of all religious traditions to see the current eco-crisis as humanity’s greatest challenge to which religion offers the deepest response. The case of Judaism makes clear that the Abrahamic traditions can meaningfully address our ecological crisis documented by the environmental sciences.

Tirosh-Samuelson is a Jewish intellectual historian who focuses on the interplay of philosophy and mysticism, religion and science, and religion and ecology. In addition to over 60 essays and book chapters, she is the author of Between Worlds: The Life and Work of Rabbi David ben Judah Messer Leon (1991) which received the award of the Hebrew University for the best work in Jewish history for 1991, and the author of Happiness in Premodern Judaism: Virtue, Knowledge and Well-Being in Premodern Judaism (2003), and Religion and Environment: The Case of Judaism (2020).

She is also the editor of several volumes, including: Judaism and Ecology: Created World and Revealed World (2002); Women and Gender in Jewish Philosophy (2004); Judaism and the Phenomenon of Life: The Legacy of Hans Jonas (2008); Building Better Humans? Refocusing the Debate on Transhumanism (2011); Jewish Philosophy for the Twenty-First Century: Personal Reflections (2014); Perfecting Human Futures: Transhuman Visions and Technological Imaginations (2016); and the Future of Jewish Philosophy (2018). Professor Tirosh-Samuelson is the editor-in-chief of the Library of Contemporary Jewish Philosophers (2013-2018), a series of 21 books featuring outstanding Jewish thinkers today.

Tirosh-Samuelson explores the interplay of religion, science and technology with a focus on transhumanism and the relationship between Judaism, science and medicine. She is the PI or Co-PI of several Templeton-funded projects: “Facing the Challenges of Transhumanism: Religion, Science, and Technology” (2006-2010); “The Transhumanist Imagination: Innovation, Secularization and Eschatology” (2012-14); “Beyond Secularization: Piloting New Approaches for the Study of Religion, Science, and Technology in Public Life” (2016-2018) and “Beyond Secularization: Religion, Science, and Technology in Public Life” (2019-2022). These grants have funded symposia, public lectures, faculty seminars, and international conferences. Tirosh-Samuelson is a member of International Society of Science and Religion (ISSR) and serves on the academic board of Zygon: Journal of Religion and Science. As Director of the Center for Jewish Studies at ASU, Tirosh-Samuelson manages the international society, Judaism, Science and Medicine Group (JSMG) and organizes its annual conferences.