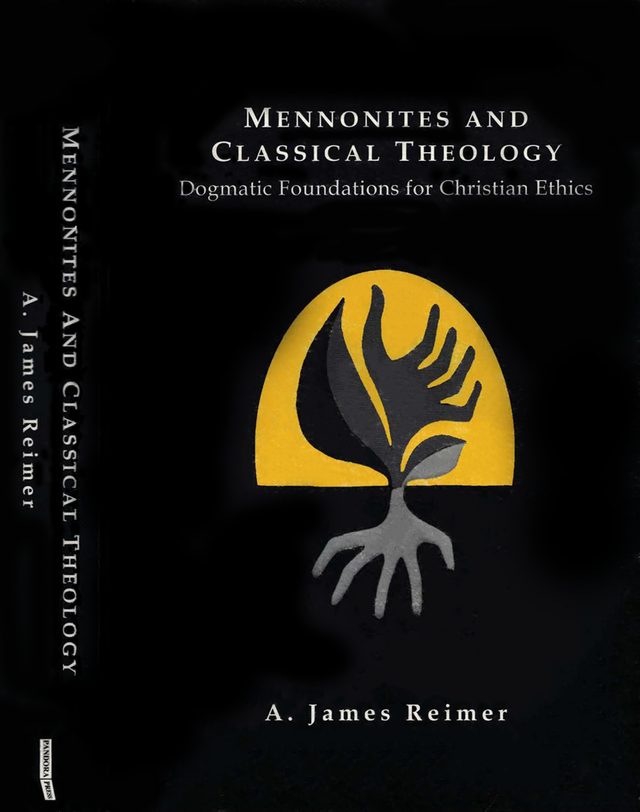 Mennonites and Classical Theology: Dogmatic Foundations for Christian Ethics, by A. James Reimer

Available on Amazon.ca and Amazon.com

"The design on the cover of this new collection of essays – one hand in the soil, the other in the sky – reflects a theme that has marked the author’s theological work for the past twenty years. In order for us contemporary Christians to engage prophetically and lovingly the creation and culture in which we are rooted, we must reach toward the divine that transcends nature and history. Mennonites and Classical Theology, a feast of Reimer’s writings since the late 1970s, is essential reading for graduate students, teachers, and church leaders interested in current conversations about Mennonite theology and ethics."

"Here a Mennonite theologian invents a new way of presenting his own theology. James Reimer introduces the reader to the dialogue with other theologians, thanks to which the evolution of his own thought has taken place. In this intellectual wrestling, Reimer becomes a theologian faithful to his own tradition and at the same time a creative participant in the wider ecumenical space of Christian theology. Non-Mennonite readers will find this book an excellent introduction to the richness of Mennonite thought."

"James Reimer has carved out a theological space in which Evangelical, Mennonite, and Catholic concerns intersect in creative and mutually enriching ways. Representatives of all three traditions will do well to listen to and learn from this distinctly Mennonite way of thinking ecumenically."

"We are indebted to James Reimer and Pandora Press for making his work available in a single volume. I believe the heart of Reimer's work - the relation of the Anabaptist tradition to the great tradition called Catholic - is one of the most important questions facing Christians as we grope our way to the future. Like Reimer, I believe Christian nonviolence requires the development of the robust Trinitarianism and Christology found in the classical creeds. Yet Reimer sees clearly that what is required of us is to think and live as courageously and imaginatively as our forbears."

"Reimer's sustained theological labour to situate... Mennonite discipleship within the inheritance of classical Trinitarian and Christological doctrine has produced an immensely rich, wide-ranging, and penetrating set of reflectionsfrom which theologians of every persuasion may benefit."

"This book documents a rich and thoughtful ecumenical conversation of a fine Mennonite theologian with many contemporary theological thinkers. The range of topics is as broad as it is impressive."

A. James Reimer (1942-2010) was born in Morris, Manitoba, the eldest of five children. He grew up in Altona, Manitoba, where he attended elementary and high school, and was baptized into the Altona Bergthaler Mennonite Church in 1958. In 1960, he enrolled in the Canadian Mennonite Bible College in Winnipeg, graduating in 1963 with a Bachelor of Christian Education degree. After two years as a news reporter for the Red River Valley Echo, Reimer taught at Elim Bible School in Altona for two years. He also directed Camp Assiniboia outside of Winnipeg from 1965 to 1971. In 1967, Reimer began an Honours B.A. in History and Philosophy at the University of Manitoba, graduating in 1971. He was awarded a Rockefeller Theological Fellowship which led him to Union Theological Seminary in New York City for a year of studies in the Master of Divinity program. In 1972, Reimer moved back to Canada to begin a Master's degree in History at the University of Toronto, concentrating on European intellectual history. His major research work was on the philosopher Ludwig Feuerbach. While engaged in graduate studies, he was Student Services coordinator for the United Mennonite Conference of Ontario (now part of the Mennonite Conference of Eastern Canada), working with Mennonite students on university campuses.

In 1975, Reimer began Ph.D. studies at the University of St. Michael's College, affiliated with the University of Toronto. He graduated in 1983 with a dissertation on the topic, "Theological Method and Political Ethics: The Paul Tillich-Emanuel Hirsch Debate of 1934-35." In 1978, Reimer began his teaching career at Conrad Grebel College, University of Waterloo, where he taught in the areas of modem theology, Mennonite theology and ethics, and religion. For many years he was director of the Conrad Grebel College graduate program in theology (Master of Theological Studies). In 1990, he became the founding director of the Toronto Mennonite Theological Centre, a research and teaching centre at the Toronto School of Theology (TST). He has taught courses at TST since the early 1980s in Anabaptist-Mennonite history and theology, as well as in his area of specialty: German theology in the Hitler period, concentrating especially on Dietrich Bonhoeffer and the Confessing Church.

Reimer has published many articles in academic journals and popular periodicals and is the author/editor of several books, including The Emanuel Hirsch and Paul Tillich Debate: A Study in the Political Ramifications of Theology (Edwin Mellen, 1989), translated into German as Emanuel Hirsh und Paul Tillich: Theologie und Politik in einer Zeit der Krise (Walter de Gruyter, 1995); The Influence of the Frankfurt School on Contemporary Theology: Critical Theory and the Future of Religion (Edwin Mellen, 1992); The Dogmatic Imagination: The Dynamics of Christian Belief (Herald Press, 2003); Christians and War: A Brief History of the Church's Teachings and Practices (Fortress, 2010); and the posthumous Toward an Anabaptist Political Theology: Law, Order, and Civil Society (Cascade, 2014).