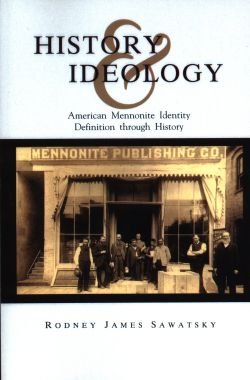 "At base, Rodney Sawatsky’s argument is that during times of uncertainty and anxiety, Mennonites have circled the wagons by using history to define their identity. In the 18th century, American Mennonites, who had nearly surrendered their denominational self-consciousness to German ecumenism on the American continent, rallied with the publication of the Martyrs Mirror and the Ausbund hymnal. Both publications asserted that suffering was normative, a motif that served as an identity marker for Mennonites through the 18th and into the 19th centuries... What makes this 2005 book particularly intriguing is its tardy publication date. Originally a 1977 dissertation, History and Ideology is a historical document itself. The story of its long-delayed publication, recounted in introductory notes by James Juhnke, positions the book as yet another round in the continuing contest over American Mennonite historiography. By historicizing the “Anabaptist Vision,” after all, Sawatsky fundamentally questions the normativity of the consensus. That his dissertation could not be published as late as the 1970s perhaps suggests the hegemony of the Benderian legacy, and demonstrates that the debate over Mennonite identity and Anabaptist origins continued with some vigor after the 1940s. Sadly it is a sequel that Sawatsky, who died in 2004 of a brain tumor, will never write." - David R. Swartz, University of Notre Dame, Notre Dame, Indiana, in the Conrad Grebel Review

Rodney James Sawatsky (1943-2004) was a church historian and college administrator who served as Academic Dean and then President of Conrad Grebel College.