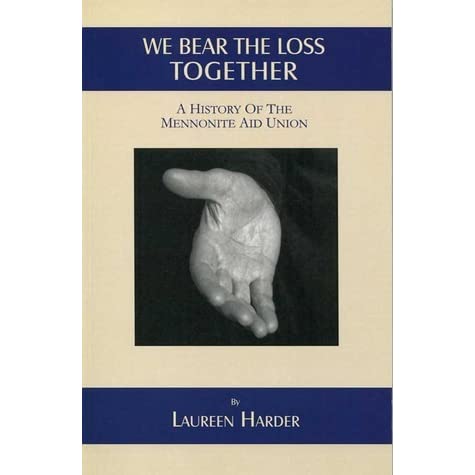 We Bear the Loss Together: A History of the Mennonite Aid Union, by Laureen Harder Gissing

Formed in 1866, the Mennonite Aid Union of Ontario was the first Mennonite mutual aid organization in North America. Rejecting both the stock and mutual models for insurance companies, MAU insisted on holding no surplus and collecting no premiums in its early years. Its resolve to bear its members burdens together without regulation or resort to the courts led it at times into conflict with government, insurance companies, financial institutions, the Mennonite church, and its own membership. However, its unusual method of operation also garnered it respect from both individuals and institutions.

"A predecessor of other para-church organizations such as Mennonite Central Committee and Mennonite Foundation, the Mennonite Aid Union story is significant in our understanding of Mennonite history. With its formal dissolution in favour of a new Anabaptist Insurance organization Mutual Aid eXchange or MAX, designed to meet the concerns of the new millennium, we can be grateful for this small volume. Careful research and a historian’s eye for a good story has allowed author Laureen Harder to place MAU in the changing social context of its 140 years. I was engaged by the compelling anecdotes describing fires and storms, and the creative and compassionate responses to those affected by the devastation that they wreaked in their wake." - Journal of Mennonite Studies

"Organized in 1866, the Mennonite Aid Union (M.A.U.) of Ontario was the first mutual aid society among North American Mennonites. Laureen Harder tells the story of the evolution of this institution in four chronologically arranged chapters. For much of its history the group operated on a stictly reciprocal basis, holding no surplus and, in its early years, collecting no premiums." - Mennonite Quarterly Review