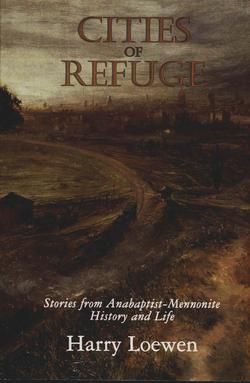 Cities of Refuge: Stories from Anabaptist-Mennonite History and Life, by Harry Loewen

Spanning 500 years of Anabaptist migration from 16th century Europe to modern day Canada, Loewen's stories centre on the Mennonite struggle to find a sense of home in the world but not of the world. Early Mennonites, on a quest for permanence and security away from home, sought "cities of refuge," places where tolerant rulers would allow them to live according to their faith, values and tradition. The enduring faith of the Mennonites lies at the heart of these stories.

"With Cities of Refuge, his second collection of "historical tales/' Harry Loewen underscores that historical understanding is not the sole domain of the academically inclined, but also belongs to the general public." - Rich Preheim in the Mennonite Quarterly Review

"Cities of Refuge is a sequel to an earlier work by Loewen, No Permanent Home, published in 1993. This new work is a collection of short stories tracing the history of Mennonites from their early beginnings in the 1520s in Zurich through to present day Canada. The chapters are short and there are no footnotes, although a summary of sources used for each chapter is included at the end of the book. While it is possible to read the work as a continuous narrative, it has been written in such a way that each chapter may be read on its own. Loewen argues that throughout their roughly five hundred years of history, Mennonites have had an ambivalent relationship with cities. Cities have variously provided reprieve from persecution, as well as acted as sources of affliction. With urban centres as the backdrop, Loewen takes the reader on a rollicking ride through five centuries of history told through stories of intrigue, persecution, romance, philosophy, art, and a sometimes wavering commitment to nonviolence, all underpinned by a steadfast faith in the God of Menno Simons" - Robyn Sneath in the Journal of Mennonite Studies