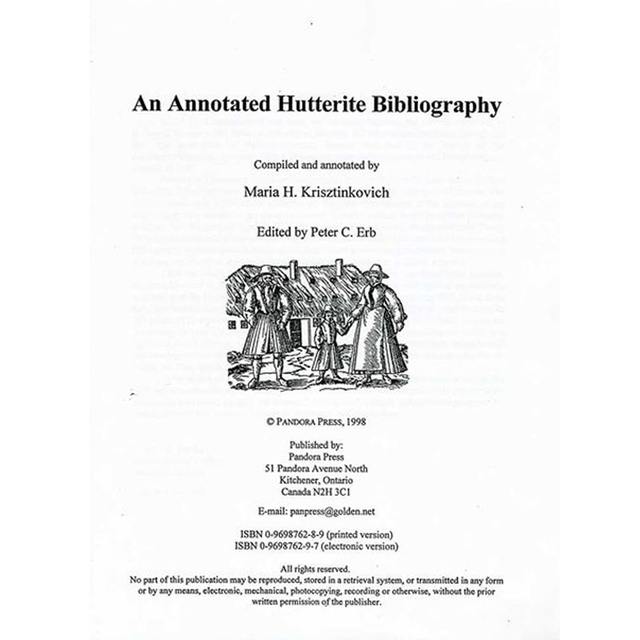 During more than three decades, Maria Krisztinkovich collected and organized references to Anabaptist-Hutterite materials. Her work as librarian at the University of British Columbia facilitated this task. Eventually her contact with professor Werner Packull led to the conversion of her massive Hutterite bibliography into a computer data base, a task overseen by professor Peter C. Erb of Wilfrid Laurier University. The resulting bibliography is a researcher's goldmine. Included in the more than 3,000 individual entries are many extremely rare items located in eastern European archives. In 1996 prof. Packull took the manuscript with him on his sabbatical leave to Europe. During this time, the eastern European entries were checked and corrected by Rev. Oliver E. Szebeni of Hungary. The usefulness of the bibliography is enhanced by English annotations, so that readers not conversant in eastern European languages can still benefit from all entries.

"An Annotated Hutterite Bibliography is a comprehensive bibliography of the Hutterite Brethren with over 2,700 entries listing books, pamphlets, dissertations, manuscripts, films and both scholarly and newspaper articles. The entries are unnumbered but are in alphabetical order by author’s name or title for anonymous works. The volume covers not only the formal Hutterite Brethren denomination but also 'Habáners.' These were the Hutterites left behind in their move out of Hungary and forced by the Catholic Church to become Catholics. The Habáners retained their communal lifestyle and many Hutterite characteristics but their infants were baptized. The work concludes with three short appendixes: a list of reference works, an author’s note, and an interesting list of 144 different names rightly or wrongly applied to Hutterites through the ages." - GAMEO