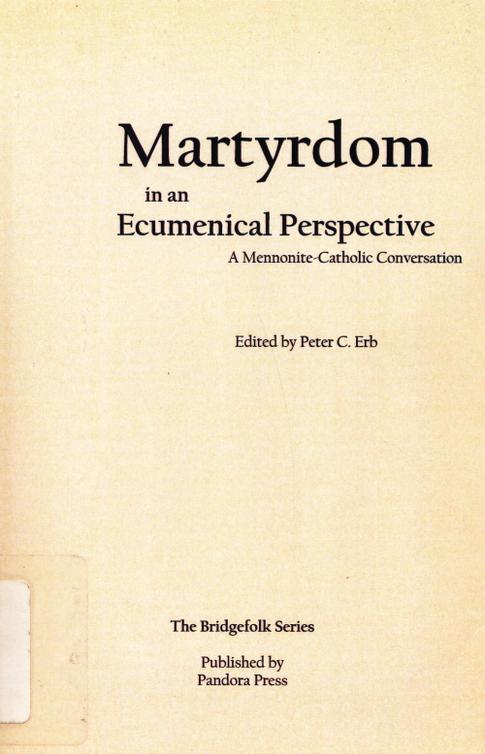 Martyrdom in an Ecumenical Perspective: A Mennonite-Catholic Dialogue, Edited by Peter C. Erb

In October 1998, seven Roman Catholic and seven Mennonite representatives began a series of open and cordial discussions with the aim of “healing memories,” following 475 years of hostility and alienation. At the end of a five-year process of discussion, prayer and discernment, a report was issued titled Called Together to be Peacemakers.

In its conclusions, Called Together to be Peacemakers notes that in order to heal negative images and memories, they must first be “purified” by “facing those difficult events of the past that give rise to divergent interpretations of what happened and why we need to understand the mentalities, the conditions, and the living dynamics in

which these events took place.”

One of the most painful memories in need of healing concerns the legacy of martyrdom — a reality in both traditions, although with different mutual dynamics. The martyrdom of Anabaptists in particular led to calls for further study, and the convening of two conferences on the subject of “Martyrdom in an Ecumenical Perspective,” both held at St. John's Abbey, Collegeville, Minnesota (2003 and 2004). A selection of the presentations is published for the first time in this volume. They demonstrate the willingness of both Catholics and Mennonites to confront even the most difficult issues of the past in a spirit of openness, humility and understanding.