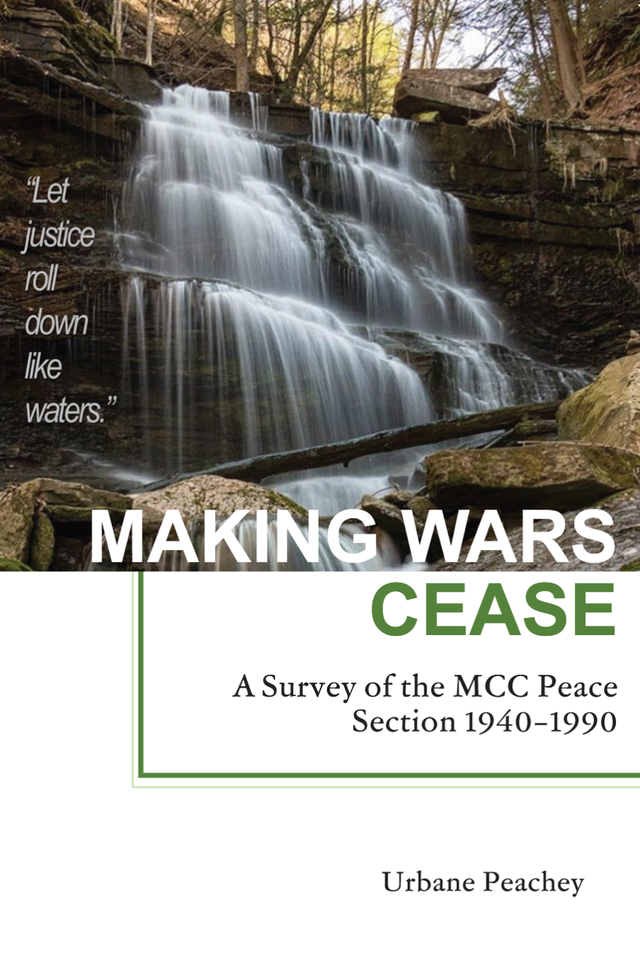 Making Wars Cease: A Survey of the MCC Peace Section, 1940–1990 by Urbane Peachey

This book is a modest effort to preserve and interpret the half century work and witness of the Mennonite Central Committee Peace Section. The Section was formed by MCC in 1942 and assigned to address “all matters that concerned witness to the nonresistant way of life on behalf of all member groups.” It was organized semi-autonomously, with its own board because of US Selective Service urgencies. The Section was formed in January, 1942, after Mennonites, Quakers and Church of the Brethren had spent half a decade appealing to the U. S. government for exemption of draft age men from military service. Canadian Mennonites served on the MCC board and the Peace Section in the early years, before the formation of MCC Canada in 1963. The book includes perspectives on the organizational issues between MCC Canada and MCC US. Peace Section bi-national was formed in 1974, with full Canadian-U.S. membership. The book includes Canadian perspectives and major roles of Canadian members on the bi-national Section, but only summarizes peace activities of the Canadian Peace and Social Concerns Committee and MCC Canada.

"Across five decades, North American Mennonites worked together in the MCC Peace Section to address issues of war and peace and to push boundaries of social justice advocacy. Urbane Peachey’s stance as practitioner, visionary, and critic provides authenticity and depth to this study of twentieth century Mennonite-led efforts, outcomes, and roads not taken. In hindsight, the Peace Section’s aspirations and breadth were remarkable. Peachey’s historical appraisal of this “lively mosaic” is a timely contribution to contemporary debates regarding present-day humanitarian need and grounded ethical response."

"Urbane Peachey draws on both archival documents and his own long experience to remind us of a key part of Mennonite peacemaking work as it developed and matured in the 20th century. MCC Peace Section was sometimes in the foreground but consistently in the background helping Mennonites network with one another and with ecumenical partners to respond to new challenges with growing theological sophistication and practical wisdom. Making Wars Cease will be an indispensable resource to help us continue to remember and learn from that work."

— Gerald W. Schlabach, Emeritus Professor of Theology and former chair of Justice and Peace Studies at University of St. Thomas in Minnesota.

Urbane Peachey was Executive Secretary of the MCC Peace Section binational from 1975-1986, with a focus on the joined agenda of Canada and the US, including international work. He first served in Mennonite Central Committee as Director of Personnel Services where he coordinated the recruitment, selection and placement of MCC workers, 1960-1969. He served as the MCC country director in Jordan and MCC Representative for Egypt and Lebanon from 1970-75, residing in Jordan and Beirut, Lebanon with his family, just before coming to the Section. After 1986, he changed careers and served as pastor and counselor for 20 years until his retirement in 2005. Peachey holds graduate degrees from Princeton Theological Seminary, Lancaster (Pa.) Theological Seminary, and the University of Pittsburgh's School of International Affairs. He graduated from Eastern Mennonite University in 1958 with a BA in Sociology.