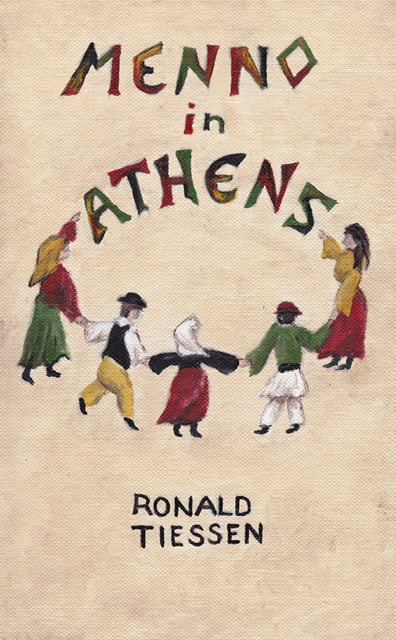 Menno in Athens: A Novel, by Ronald Tiessen

An Anabaptist-Mennonite finding a home, not in Jerusalem, but in Athens? Cavorting with ancient pagans? Placing ancient Greek poets and playwrights next to Hebrew prophets? Imagining peacemakers in the heroic age that celebrated prowess in war? And, finding inspiration in the writings of the French mystic, Simone Weil?

Menno in Athens stages such encounters while blending memoir and meditative travelogue where the wisdom of ancient Greece and the tenets of Anabaptism meet.

Menno, the narrator, undertakes a pilgrimage to Greece, where he visits sites once home to ancient poets, sages, playwrights, and philosophers. Along the way, an imposing coincidence with Menno’s Anabaptist heritage reveals itself in voices that draw attention to the true cost of violence and discord—voices reiterating an aspiration for peace, and even love.

Ronald Tiessen was raised in a Mennonite family and fellowship outside Leamington, Ontario. His studies brought him to Conrad Grebel College, the University of Waterloo, the University of Windsor, and thereafter to Greece. After studying Ancient Greek history in Athens, he made his home on Pelee Island, the setting of his 2016 novel The Pele’ Harbour for Odd Birds. Following his studies, he retained an unflagging curiosity about ancient Greece and has returned numerous times. Menno in Athens bridges two defining experiences in his life—his Anabaptist-Mennonite heritage and his love for Greece.

Lisa Rollo Kipp is a multimedia artist from Pelee Island, Ontario, whose love for art began at a very early age. The encouragement of her parents and a gifted high school teacher inspired her to continue her exploration of art. She currently enjoys oil painting, pen and ink drawing, and working with found items in nature.