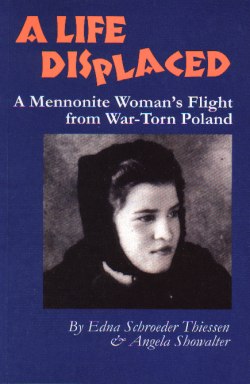 Through dramatic stories and photographs, Edna Schroeder Thiessen shares a piece of Mennonite history that has received little attention - the story of Mennonites in Prussia and Poland during World War II who failed to escape the advancing Russians.

"The life story of an individual can often be an eloquent window through which to view and understand larger historical events and eras. In some cases, personal memoirs, whether written or oral, function mainly to confirm the master narratives of which they are part. In other cases, however, individual experiences nuance, or indeed sometimes contradict, the narrative accepted as a group's historical memory. The memoir of Edna Schroeder Thiessen contains both "harmony and dissonance" (22) with the larger Mennonite story. A Life Displaced illuminates the dramatic and tragic history of Polish Mennonites during the World War II, a story that has received lesser treatment than the exodus of Soviet Mennonites from Ukraine during the same years.”

– Marlene Epp, in the Journal of Mennonite Studies