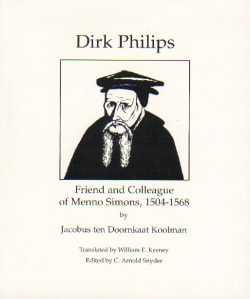 "In his introduction to The Writings of Dirk Philips, C. J. Dyck states that Philips 'ranks second only to Menno Simons in his influence on Dutch Anabaptism during the first decades of the movement' (11). When it comes to the writings of Dirk – which are more systematic and comprehensive than Menno’s – Dutch scholars might rank him even higher than Menno. Although The Writings of Dirk Philips have been available in Dutch since 1564 and in English since 1910, hardly any systematic work has been done on Dirk’s theology or historic research on his life. In order to fill this gap, ten Doornkaat Koolman’s biography of Philips has been translated into English by William Keeney and edited by C. Arnold Snyder. The author was born in 1889 in Hamburg, Germany, studied theology in Marburg and Berlin, and at the Mennonite Seminary in Amsterdam from 1911 to 1915. Under the influence of professors Cramer and de Bussy, he developed a keen interest in Anabaptist history and theology. His many articles on these subjects, and his contributions to the Mennonitisches Lexikon and Mennonite Encyclopedia bear witness to his scholarship. For his proponenexamen in 1913 he wrote a paper on Dirk Philips. He continued his research on Dirk for a future dissertation but had to interrupt it in 1915. Not until his retirement in 1957 was he able to return to his research and finally in 1964 to have his biography published." - Helmut Isaak in the Conrad Grebel Review

Jacobus ten Doornkaat Koolman was born in 1889 in Hamburg. He studied theology in Germany and, from 1911 to 1915, at the Amsterdam Mennonite Theological Seminary. Following graduation he served as a hospital chaplain in Solingen, Germany. Health reasons forced him to move to Davos (Switzerland), in 1919. In this, his second homeland, he served as pastor from 1920 in Schanfigg, Davos, and Otelfingen. From 1943 to 1954 he was the first full-time chaplain of the hospitals in the canton of Zürich. He published numerous historical articles on Anabaptism in Amsterdam, East Friesland, and Zürich, and wrote the monograph, Dirk Philips: Vriend en medewerker van Menno Simons, 1504-1568 (Haarlem: H. D. Tjeenk Willink, 1964). He died 23 October 1978 in Zürich, Switzerland.