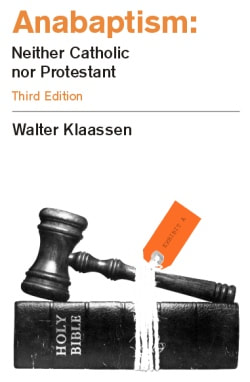 Anabaptism: Neither Catholic Nor Protestant, by Walter Klaassen

Walter Klaassen’s classic book shows how Anabaptists combined elements of Protestantism and Catholicism into a third option that, he argues, has continuing relevance for the present. This is especially true in the areas of lay witness, peace and war, economics, and relationships with the state.

“Anabaptism: Neither Catholic nor Protestant... became a classic summary of the shift away from the understanding of Anabaptism as the true or logical fulfillment of the Protestant Reformation; the lectures conceived of Anabaptism in its own terms as a tertium quid, in contrast to both Catholic Reform and Protestantism, while still recognizing its debt to both traditions.” – Jonathan Seiling in Renaissance and Reformation / Renaissance et Réforme

Walter Klaassen was born at Laird, Saskatchewan in May, 1926. His father and grandfather were ministers in the Eigenheim Mennonite Church. A strong emphasis in the home on the church tradition fixed the author's loyalties and interests. The investigation of that tradition became his major interest in graduate school. Since then he has published numerous books, articles, and chapters in books dealing with Anabaptism. He has done major work in translating sixteenth-century Anabaptist writings into English (three books and counting), a service he continues to perform in his retirement from active teaching. He is a graduate of Rosthern Junior College, McMaster University Divinity College, and Oxford University. He is