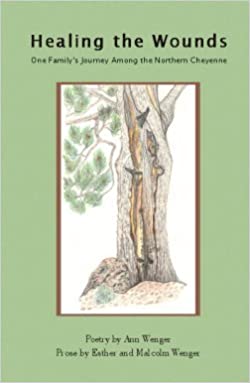 Healing the Wounds: One Family's Journey Among the Northern Cheyenne, by Malcom and Esther Wenger

What happens when two newly-wed Mennonite twenty-year-olds are sent as missionaries to the Northern Cheyenne people in Montana? When Malcolm and Esther Wenger arrived in Busby, Montana in 1944, they encountered an "utterly alien" world of beads, braids, feathers and hunters, just a few days' journey from home. The Cheyenne they met were a people whose great grandparents, 68 years earlier, had defeated George A. Custer in the Battle of the Little Bighorn. Only in 1884, after fierce resistance, had the U.S. Government successfully forced the surviving Cheyennes to settle on this reservation. What did the Cheyenne people make of these Mennonites, who would learn to speak their language and tell them of a Savior who had come to earth for the Cheyennes too? This is the story of the Wengers, of the Cheyennes who became their brothers and sisters in Christ, and of those who chose other paths. It is also the story of the five Wenger children, especially of Ann, the daughter who more than anyone else in the family absorbed Cheyenne ways, and felt the pain of the Cheyenne people. She, like the Cheyenne people as a whole, suffered serious wounds. And she, like many Cheyennes today, has overcome the wounds of a painful past and begun to heal. Her poetry and her mother and father's prose tell the stories.

"In 1944 newlyweds Malcolm and Esther Wenger moved to Busby, Montana to serve as missionaries among the Northern Cheyenne. This book is a collection of their reminiscences of two decades of building the church there. It includes stories of sorrow and joy, of lives conquered by addictions and lives changed by the love of Jesus. The stories celebrate the lives of indigenous church leaders, Cheyenne hymn writers, Cheyenne culture and friendships that spanned the cultural gap. But mostly it is the story of one white family's awakening to the destructive forces of white domination over indigenous culture." - Mennonite Quarterly Review

Malcom and Esther Wenger were missionaries who lived on the Northern Cheyenne Reservation in Montana from 16 March 1944 to 17 August 1966.